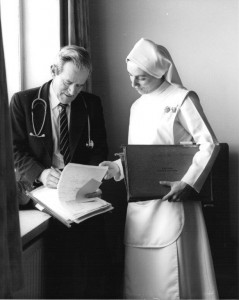 last. Aiden set up the practice in 1962 and worked tirelessly with his colleague Dr Betty Ward  to serve the needs of Kilmacud, Stillorgan, Mount Merrion and further afield for over 30 years. Aiden had a huge and loyal following of patients which was reflected by the huge turnout at his funeral in St. Laurence’s Church, Kilmacud. He had an illustrious career outside of General Practice also having been actively involved in Medical Politics with the Medical Union and later the IMO. He was later elected president of the Irish College of General Practitioners in 1989 and set up the Sick Doctor Scheme which helped large numbers of Doctors return to work from addiction and psychiatric illness. We have heard from many of our patients about how he was there for them at difficult times in their lives and helped them through many catastrophes and crises. He will be sadly missed by all.